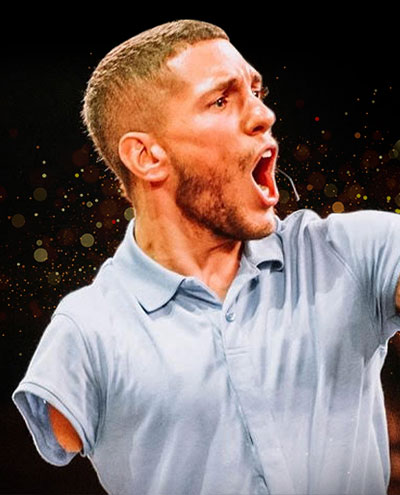 Nick Santonastasso is constantly defying the odds. Despite being born with no legs and one arm, Nick is a bestselling author, world renowned keynote speaker and a professional model/bodybuilder.

When Nick was conceived, he had a 30% chance of surviving birth. Nick was 1 of 12 people in the world at the time who was born with Hanhart Syndrom, a rare genetic disorder which either leaves the babies with undeveloped limbs or undeveloped organs. Fortunately when Nick was born the only things that were affected were his limbs. They did a test on his organs and they came out a 100% healthy.

Nick was self-loathing and thought about ending his life. Fortunately, he was able to find his “WHY” through wrestling in high school. He had to Amputate part of of his arm to be able to wrestle. Nick was not the best wrestler but he would pack tournaments with spectators. People would approach him with tears of joy and excitement and say how much he inspired them. That was a turning point for Nick and his life.

Nick realized he was capable of achieving anything he set his sights on. Nick has continued to aim higher and higher, knowing that every day he lives is considered a medical miracle. He has made cameos on TV shows like “The Walking Dead” and has become a social media sensation gaining more than 1 million followers on “Vine” in less than a year. Most recently Nick decided to become a competitive bodybuilder, showing he can achieve physical greatness. In 2017, he won the 3rd place in his first competition at the “Iron Bay Classic”.

Now, Nick is sharing his experience with people all over the world as a keynote speaker and a coach at conferences, professional sports teams as well as Fortune 500 companies. He is using his challenges to inspire others to push beyond their limiting beliefs and live a life that has NO LIMITS. Nick already helped to inspire GIANTS in today’s world, such as Dwayne “The Rock” Johnson, Ed Mylett and many more.